Role Based Access Control (RBAC) is the new permission model introduced in Exchange 2010. Using RBAC we grant administrators the required permissions only and we do this using Exchange commands rather than Access Control Lists (ACLs).

RBAC answers the “who is allowed to do what, and where is he allowed to do this”. To simplify, assume you want an administrator to be only able to modify the phone number attribute of the employees in a specific department; RBAC enables you to do just that.

The RBAC model is based on Role Groups consisting of: 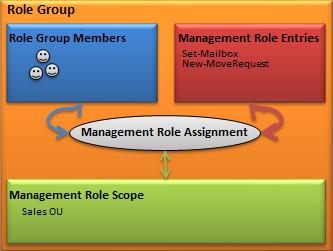 There are different types of role groups:

For the management roles, there are a Built-in, Custom and Unscoped Top Level management roles. If the built-in management roles (group of related tasks and cmdlets) do not meet our requirements, we can combine multiple roles to create a new custom (child) management role. For example, if you want to give a specialist user the ability to manage e-mail address policies and journal rules in your organization, you can assign the built-in E-Mail Address Policies and Journaling roles to a role group.

To limit the access rights of specialist users or administrators to a specific scope, we apply a management scope to the role. There are two types of scopes:

To explain the difference between regular and exclusive scopes let’s see the following example: 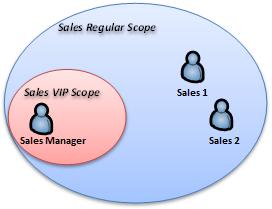 Now that we have summarized Role Based Access Control and its components in Exchange server 2010, we will start testing it.

We will test the following scenario:

We have a Sales OU that contains the employees in the sales department (Sales1 and Sales2). We have the user “Sales Admin1” who will be responsible for editing the following information about users in the Sales OU:

1- Creating the Management Scope (Where)

Firstly we will create the scope within which the role group members may run commands. To create a ManagementScope run the command:

2- Creating the Management Role (What)

Next step we will create a Management Role which defines the tasks that the specialist user or delegated administrator can do.

To remove the management role entries run the command:

We removed all cmdlets except for one (Get-Mailbox) because the management role should always contain at least one cmdlet. Apart for that it does make sense to grant the admin access to this cmdlet in this case. To check which cmdlets are now available in this management role use the command:

Now we will add the required cmdlets together with the parameters we want to allow.

3- Creating the Role Group (Who)

The Roles and CustomRecipientWriteScope parameters identify the Role and Scope we created in the previous steps. These now come together under the RoleGroup.

Running the command Get-RoleGroup returns the specified role group details. Note that a Management Role Assignment is automatically created to link the management role with the role group. This is named using the naming convention <ManagementRoleName>-<RoleGroupName>

Note that the role groups are created in Active Directory under the Microsoft Exchange Security Groups organizational unit: 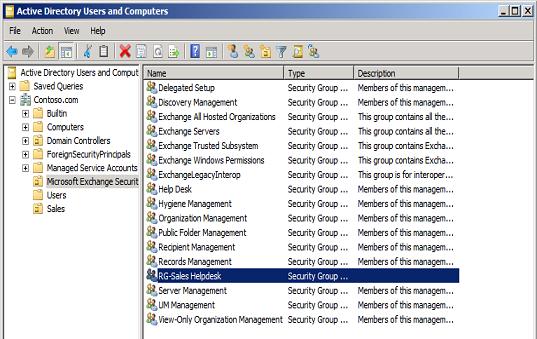 Now we will add the specialist users IDs as members of the RG-Sales Helpdesk role group. This can be done using the command:

To check the results run the commands:

If you try to run the command on a user that is not in the Sales OU, i.e. not within our management scope, the command fails with the following error message:

In this article we went through a brief overview of Role Base Access Control (RBAC) in Exchange server 2010. We summarized RBAC components, created management scopes, roles and role groups. Finally we tested our newly acquired rights.

How to check the backup status in Exchange 2010

Restoring Mailbox Data from a Recovery Database in Exchange 2010 SP1

How to Enable or Disable POP3 Access for Exchange 2010 Mailboxes